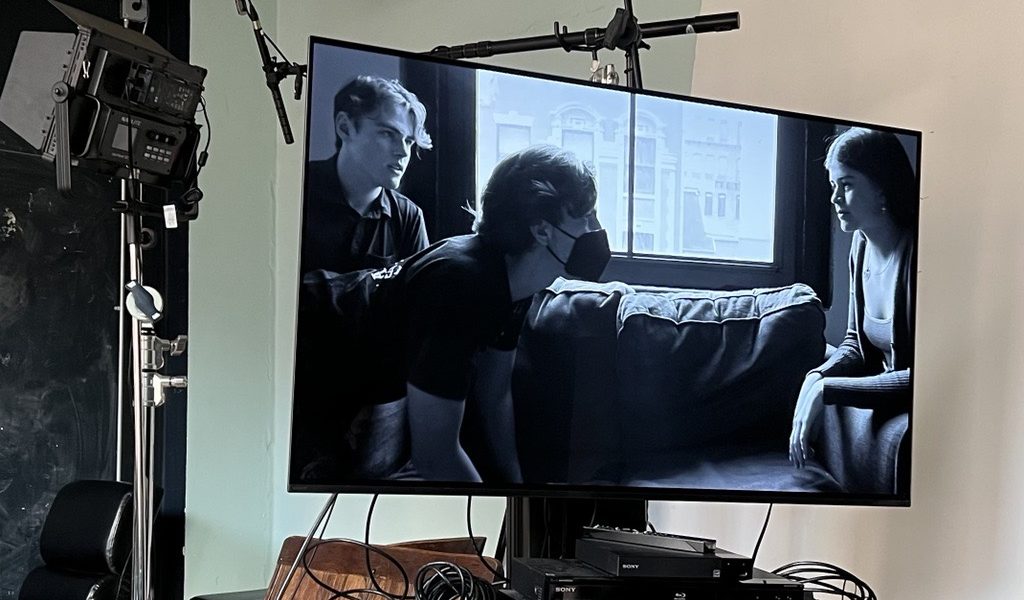 This summer, members of the Theatre Conservatory at Montverde Academy participated in various training camps across the country where they were able to sharpen their performing arts skills. They left their respective trainings not only with a newfound confidence in their acting techniques, technical skills, and artistic skills, but also with a greater knowledge of themselves.

Javier worked as an apprentice at the Orlando Reparatory Theatre with choreography and building the stage set. He helped the kids practice their scenes and establish their character. He also auditioned for a Broadway play in New York. He was the only minor called among many twenty-year-old actors. Javier learned the value of being himself in auditions, and he learned that revealing his true personality shows people that he is the kind of person that they will want to work with.

Lily participated in a one-week intensive at Interlochen Arts Academy in Michigan where she focused solely on musical theatre techniques. Each day she was in a four-hour masterclass where each student performed and was then critiqued. While there, Lily stayed in cabins with other people in the program, which gave her an immersive experience and exposed her to people from all over the world. She was also in a production at Dr. Phillips Center for the Performing Arts where she played the part of Paula Abagnale in the performance of Catch Me If You Can at Steinmetz Hall. “Everyone was outstanding,” Lily said. “It’s similar to [Montverde Academy], how everyone is so talented.” She was able to work with a director and choreographer who were both from New York!

Jade took classes in filmmaking and in performing arts for film at The Savannah College of Art and Design in Atlanta, Georgia. She had the privilege to work with Chris Meyer, who has acted in various shows on Netflix, including Ozark.  Jade shared Chris Meyer’s advice: “Be yourself and bring yourself to the character because that’s what people want to see.” Jade worked with a group that made their own short film. They even wrote a screenplay and made a storyboard for the film. Jade was tasked with the cinematography for the film, but she also participated in the editing stage. “I learned that it’s good to do different parts because if you’re a person who can do anything, you’re more likely to get jobs,” Jade said. On the last day of camp, parents were able to come see the film.

Amelie participated in the Directors in Training program at Young Star Musical Theatre in Winter Garden. From June 6 to July 29, she worked as a director, choreographer, and sound technician for their summer camps. She worked closely with Shmaine Shepherd and Lexy Cizek to improve her teaching abilities and construct a show from the ground up. She instructed ages 5 to 18 and was able to witness immense talent. Overall, she grew as a teacher and challenged herself creatively. “I am incredibly grateful for the wonderful six-week opportunity I was granted,” Amelie said.

Alec went to NYU’s Tisch School of the Arts for a four-week Stonestreet acting program, which is comprised of both acting and filmmaking. He learned about being behind the camera, being in front of it, and how to be a resourceful actor in order to make his own projects. He had the opportunity to see four Broadway shows. Not only was the experience fun for him, but he also grew as a filmmaker and as a person, learning how to be more confident. He trained five days a week for seven hours each day in classes such as improv, filmmaking, etc. He took a Meisner acting workshop that helped him with movement and physicality, and it also helped him to be more vulnerable and open to surprises on stage. “It’s a way of helping to accept who you are and show the rawest version of yourself,” Alec said, “and be able to put that on stage or on camera.”

Arianna performed as Tomika in the production of School of Rock at the Theatre South Playhouse in Orlando. “I had a blast performing five times a week and having experience in the pre-professional world,” Arianna said. “The cast of School of Rock really made the show amazing.”

Madison participated in a five-week intensive at Boston University where she took classes in improv and movement, among other classes. She would spend three to four hours acting, and then she would have theatre collaborative ensemble where she worked with others to create an original theatre piece. “Something that really surprised me was the fact that no matter where you go, there’s always a community of people that create art,” Madison said. “Art always lives. We were born with it as humans since the dawn of time, and we keep creating it, so there must be a reason why we do.” She explored the works of Raúl de Nieves, the Treasure House of Memories, and Hispanic and Latinx culture; and she learned about social awareness and being cognizant of others.

Tyler spent three weeks at Interlochen Arts Academy in Michigan where he learned not only about acting and technique, but also about himself and how to be a more independent person. His director found scenes from an online forum called the New Play Exchange that were then shortened. “A lot of us did not play human beings,” Tyler said. Some of them played music notes, some played animals, and Tyler played a piece of pollen. What he enjoyed about that was exploring “how humans and other things connect and how they relate and how they feel.” His favorite part was at the end of the three weeks when his parents came and were able to watch him perform. “It was very emotional for me because I had only talked to them over the phone, and then for them to see me performing was a really great experience.”