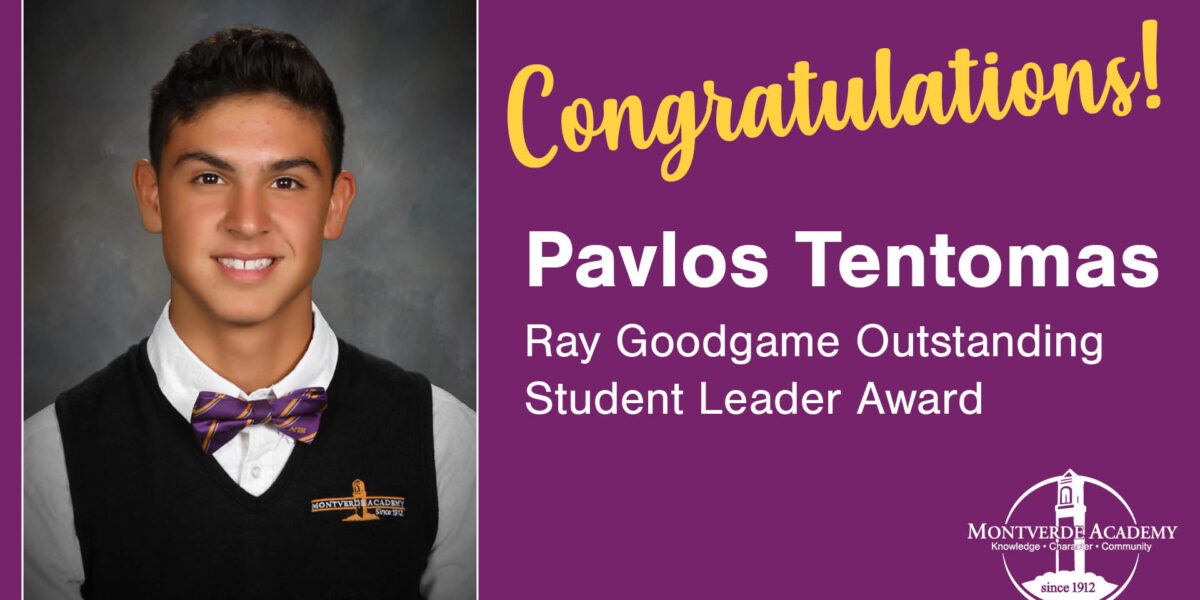 The Ray Goodgame Outstanding Student Leader Award was developed to honor students in the South Lake area that not only excel in academics but additionally in service and leadership within their school and community. The award, named after longtime Clermont City Council Member, Ray Goodgame, and honors his legacy and constant commitment to the South Lake community through education and volunteerism.

Pavlos has been a member and leader of several different clubs on campus like Night for the Cure, Chess Club, Entrepreneurship Cub Vice President, and Honor Council President. Alongside his participation in the Soccer Institute at Montverde Academy (SIMA), Pavlos has had the opportunity to work with the Dreamplex program and teach kids with disabilities to play soccer. He has also volunteered with Give Kids the World, Orlando Union Rescue Mission, and United Against Poverty.

Pavlos has earned several awards both in the classroom and on the field throughout his time at the Academy. They include Coach’s Awards in both his freshman and sophomore seasons, Biology Honors award his freshman year, and AP English and AP U.S. History awards during his junior year. He has also taken 20 Honors and AP classes during his tenure at the Academy.

Pavlos has also worked with several initiatives on campus including writing pieces for the Academy’s bi-annual publication, the Tower Magazine, and is currently working with the student advisory team for the Educational Technology and Innovation Center which will be housed in the newly renovated Rast Library on campus.

“Pavlos is an outstanding student and citizen, showcasing first-hand everything that Montverde Academy strives to instill in all students,” said Dr. Kasey Kesselring, Montverde Academy President. “His dedication to helping others is evident in all he does from volunteerism to club work, academics, and athletics. We are proud of this incredible accomplishment and look forward to witnessing his continued growth at the next level.”

On behalf of the entire Montverde Academy school community, we are proud of this incredible accomplishment and can’t wait to see what Pavlos will accomplish next!