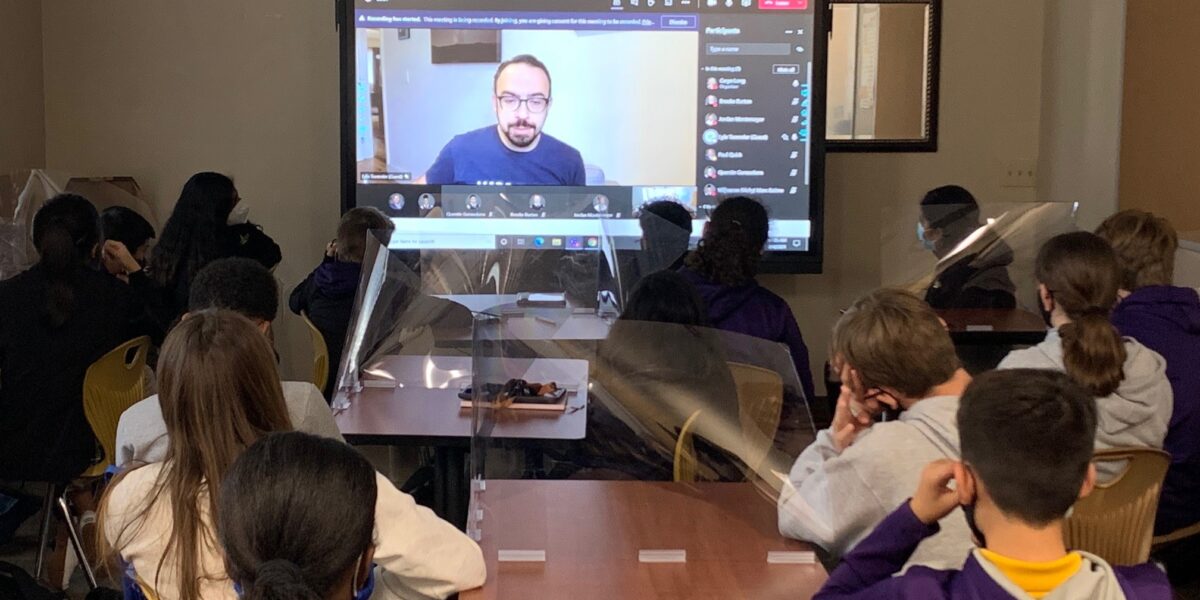 Today, NASA’s Perseverance rover will arrive on the planet Mars! It has travelled nearly 300 million miles since its launch on July 30, 2020 and will seek signs of ancient life, collect samples and hopefully return to Earth so we may get a better understanding of the planets, as well as test new technology. Last year, sixth grade students participated in the contest to name the rover, which a student from Virginia won, but all of our sixth graders have their names inscribed on a memory stick on the rover to “virtually” travel to Mars and land with Perseverance!

Sixth-grade students have been learning more about the engineering design process and participating in activities that are related to the mission in Dr. Caryn Long’s class. “We recently discussed the Mars helicopter called Ingenuity and talked about the constraints that engineers had in order to place something on the rover that would be able to fly in an environment that was a tenth of the pressure of Earth, cover rocky terrain and provide pictures that have never before been taken. The students learned about the engineering design process by creating a paper helicopter as a prototype. They then altered the design multiple times and provided quantitative data to measure its success by taking slow motion video of their various prototype versions.”

“A Mars mission can only be launched once every 26 months when our two planets can line up to create the shortest distance between the two.” Explained Dr. Long. “Some of the most exciting parts of being able to study space exploration are the mission objectives naturally interrelate multiple core academic areas that can easily be integrated within our curriculum. The ability to land on Mars has a cool factor that is easy to hook kids on the content.”

Students have also engaged in virtual presentations with Mr. Lyle Tavernier, education specialist NASA Jet Propulsion Laboratory in Pasadena, California. Sixth-grade students learned a great many details about the landing of Perseverance on Mars. Mr. Tavernier’s presentation gave students a good look at the 3D rover and virtual renderings of what the landing will look like.

Mr. Tavernier summarized the landing with a simulation and added details of the process. “The capsule will enter Mars’ atmosphere and heat up to about 1200-1600 degrees (hotter than lava) in a heat shielded vessel and slow to about 1,000 mph. A supersonic parachute will slow progress down to about 250 mph. The heat shield will be dropped and the sky crane/rover will drop out. Using eight retro rockets to slow it down to about two miles per hour and using the images it has in its onboard computer to compare with the landscape it is seeing, it will navigate to a safe landing zone. The landing takes a full seven minutes from entering the atmosphere to touching down, but the delay in signals means that when we get the signal that the rover has entered the atmosphere, the rover in reality has already landed and we’ll be viewing what has happened in the past. Thousands of hours of simulation are recorded in the software to pre-programmed the landing process with all the commands necessary for Perseverance to touch down safely.”

STEM SAC Upper School students also enjoyed a virtual presentation with Mr. Tavernier who incorporated descriptions of the different expertise and skills that are involved in the NASA mission. From the engineers responsible for the design aspects and computer specialists who program the software to the role that an astronautical engineer would play, he provided students with insight on potential career paths for those who enjoyed STEM subjects.

“To cap off our study of Mars and lead up to the landing today, the sixth-grade students have participated in a NASA Education engineering design board game known as Mars Bound where they have a “budget” of money, mass, and power supply in order to create a launchable mission to Mars that returns the greatest science gains. They are playing a game that simulates what real NASA scientists and engineers do in order to create a mission like the Mars 2020 mission with Perseverance and Ingenuity. It provides an honest perspective of everything that must be considered in order to be successful when such lofty goals need to be achieved.”

Dr. Long will be hosting a watch party in the Fine Arts Auditorium from 2:30-4:00 p.m. to watch the mission. We look forward to an exciting and successful Mars landing!