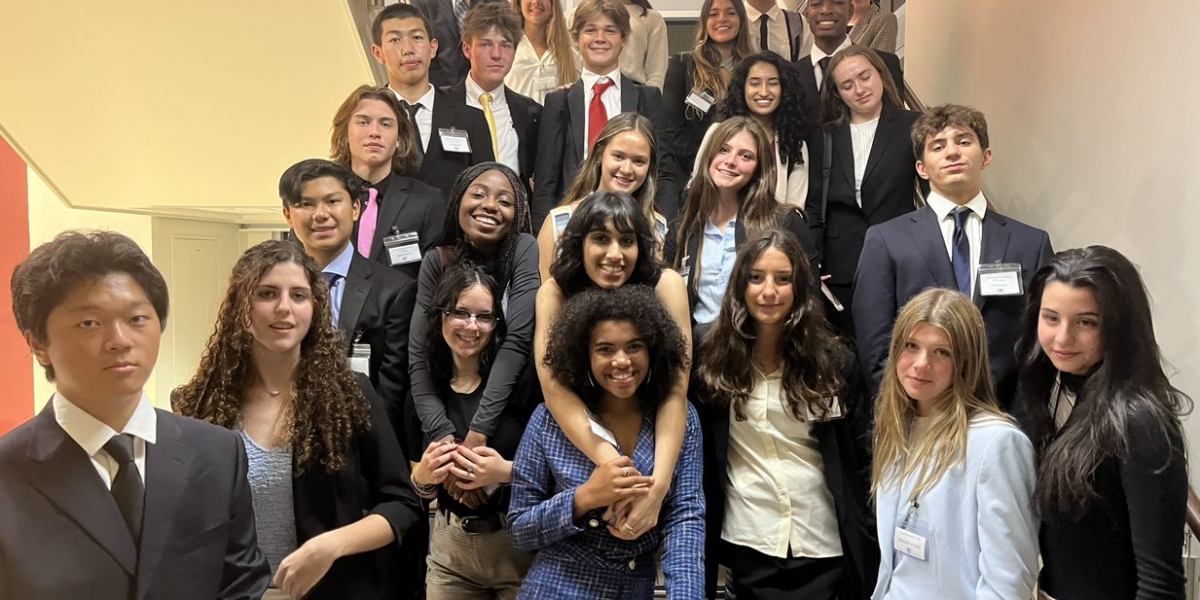 The Montverde Academy Model UN team traveled to the University of Central Florida on November 4-6 to attend the annual KnightMUN Conference. With a significant growth in the number of Eagle-MUN delegates, 27 MVA students participated in KnightMUN and represented 12 nations, such as Spain, Egypt, Saudi Arabia, etc. in 4 different committees, which included the UN Office for Disaster Relief, the Counter-Terrorism Committee, the Social Humanitarian and Cultural Committee, and the UN Commission on the Status of Women. Along with the General Assembly Committees, there were specialized and crisis committees that covered other political, historical, and fictional scenarios, such as Sekighara, the 2030 Imperial Crisis, Press Corps, and Dune. Montverde Academy delegates had the opportunity to represent one of 12 nations and collaboratively work with other delegates in order to come up with a detailed resolution to combat the issues presented in each of the General Assemblies, Crisis Committees, or Specialized Committees.

Delegates worked deliberately to research their nation’s policies and ideologies and how that related to their committee’s topic to best represent their nation. Each of the UN Committees revolved around one or two specific topics that were addressed in the conference. Whether the topics were ways to decrease natural disaster risks through nature-based prevention that aligned with the Sendai Framework or how to expand women’s rights across the globe, Eagle-MUN delegates honed their leadership skills by speaking in moderated caucuses about their country’s stance, working together with nations during unmoderated caucuses, and leading resolutions along with other nations who shared the same sentiments. A few Eagle-MUN delegates rose to the challenge and participated in specialized and crisis committees where they either faced a specific array of issues or were struck with global crises that they had to find resolutions for in limited time. Many resolutions were passed, which promoted ecological infrastructure to lessen the impacts of natural disasters while also exercising the importance of education and equality among all spectrums.

Various Eagle-MUN delegates stood out to the honorable chair with their diplomacy, leadership, and communication abilities, which allowed them to craft effective compromises and achieve resolutions. KnightMUN was a successful conference for the EagleMUN team. Overall, the EagleMUN team received a Verbal Commendation, which is the first team award in EagleMUN history.

The Eagle-MUN team is very proud of our accomplishments at the KnightMUN Conference, and we are excited to see through our future endeavors.