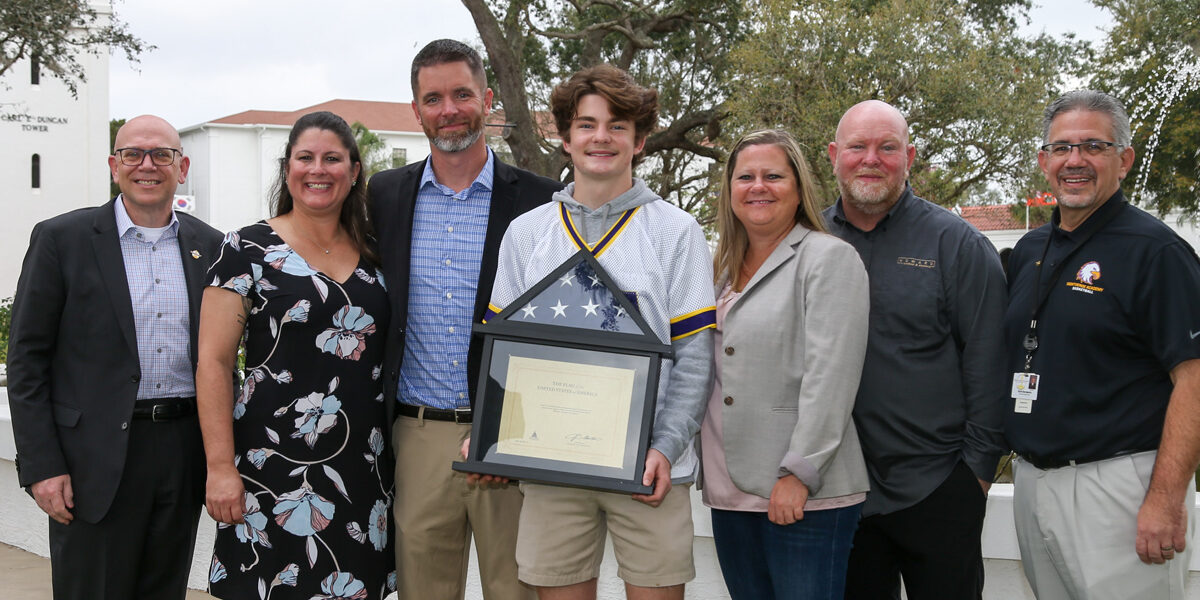 Caleb Sheyda, a senior, earned his official appointment to the United States Naval Academy (USNA) for the Class of 2025. He plans to study aerospace engineering at USNA in Annapolis, Maryland and become a Navy pilot. His family, MVA teachers, coaches and staff, representatives from Congressman Daniel Webster’s office, and Commander Patrick Rearden, representing the USNA, surprised him with an impromptu gathering where he received a congratulations letter from Congressman Webster and his official appointment letter from Mr. Patrick Rearden, USNA Blue & Gold Officer.

“Caleb is an outstanding student-athlete who is ready to take on the challenges that lie ahead of him,” said Dr. Kasey C. Kesselring, Montverde Academy Head of School. “There is no doubt that he will continue to achieve success at the highest level in all of his endeavors. Our Montverde Academy community congratulates him and his family on his achievements.”

There is military service in his family’s background with his grandfather, great-grandfathers and uncles serving, as well as his cousin, Travis in particular, who all inspired Caleb and piqued his interest in military service. “I’m really happy to see that all of Caleb’s hard work has paid off,” said Ted Sheyda, his dad. “Montverde Academy has challenged him academically and Coach Sweet and Coach Spaulding have pushed him in lacrosse, which have overall prepared him for this next step into the U.S. Naval Academy. We are proud of all that he’s accomplished.”

Caleb achieved appointment into the U.S. Military Academy at West Point and was also accepted into Auburn University on a full scholarship. He turned it all down to pursue becoming a fighter pilot with the ultimate goal of being selected for the Navy’s esteemed TOPGUN program.

“I couldn’t be prouder of Caleb,” said Kara Sheyda, his mom. “He’s always had an incredible curiosity in life. From doing math problems when he was really little to taking things apart to learn how to put them back together, we knew he was something special. I’m so glad he’s achieved all of the goals he’s set for himself.”

An Apopka native, Caleb is in his third year at Montverde Academy. He came to MVA from Apopka High School, ready to challenge himself academically and athletically, playing lacrosse for Coach Brooks Sweet, whom he had been coached by as a freshman. Since arriving at MVA, he has continued to excel in the classroom and on the field. He was selected to participate in the 2020 Boys State and the U.S. Military Academy Summer Leaders Experience, is active as an Eagle Ambassador in the Head of School’s Leadership Institute, Entrepreneurship Club and Youth Group at First Baptist Sweetwater, and volunteers for Special Olympics.

“I wanted to serve and protect my country and give back, as I’m grateful for the opportunities that God has given me,” said Caleb. “I have always pushed to challenge myself, which is what got me here and why I chose to come to Montverde Academy, to prepare for the next step. Working with the teachers and College Guidance, I’ve gained the confidence that I can do this. Applying to the Academies and colleges has been a long process with a lot of work, but it has finally paid off. I remember getting the call and hearing that I was appointed to both Academies – I was speechless. It was one of the happiest moments of my life so far.”

The application process is rigorous, requiring a medical examination, candidate fitness assessment, interview, and Congressional district or State nomination. Congressman Daniel Webster nominated Caleb. “Congratulations to Caleb and his family on his U.S. Naval and Military Academy appointments!” said U.S. Representative Daniel Webster, Congressional District 11. “I commend Caleb for his steadfast dedication to his goal of attending one our nation’s Military Service Academies. I am confident he will serve our country and community well at the Naval Academy.”

“Caleb is one of the earliest appointees in Central Florida and the kind of young person that the Navy is seeking,” said Commander Patrick Rearden. “Through a rigorous application process, we learned that Caleb is academically talented with a stellar record in math and English, physically fit and community-minded with the capacity to deal with stress that make him an ideal candidate for the Naval Academy.”