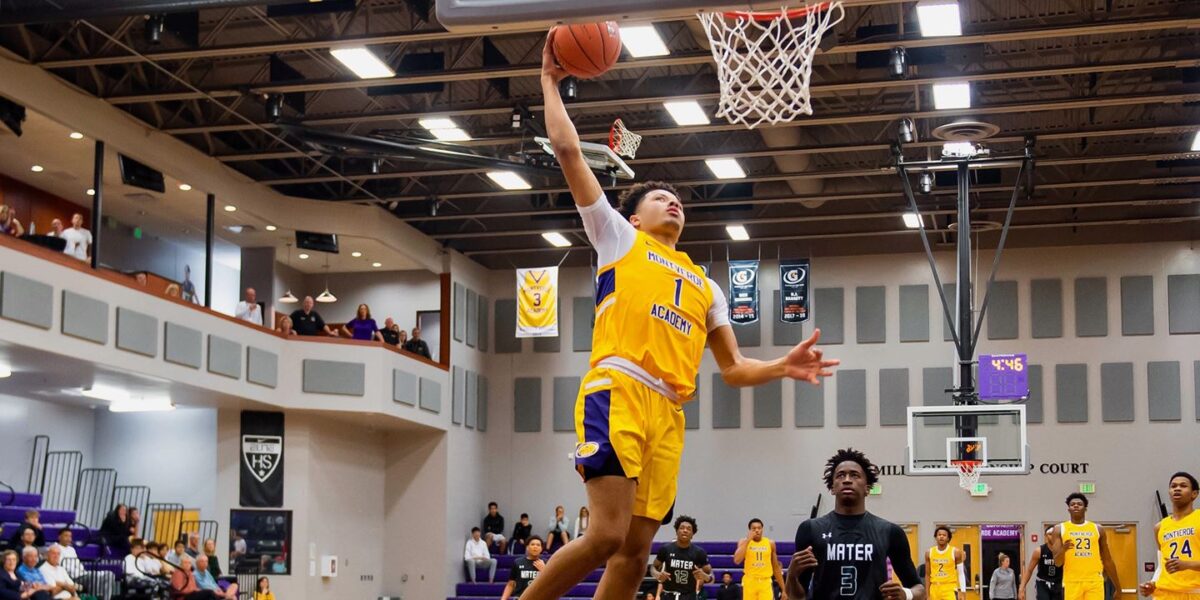 On July 29, Montverde Academy could make basketball history by tying the University of Kentucky record for the most NBA draft picks in a single year with six.

Cade Cunningham (’20) is far and away the favorite for the No. 1 overall pick. The 6’8″ guard won the 2020 National Championship while at Montverde Academy, and led what many regard as the best high school team of all time to the national title in 2020.

“Cade Cunningham is as a good of a player as we’ve ever had here,” said Montverde Academy Head Boys Basketball Coach Kevin Boyle. “Cade has an incredible work ethic, is really tough and a great leader. He’s like the CEO of a company that gets it, and understands he’s got to treat everybody fairly. That may mean being firm to one player, and putting his arm around another player to get what they all need out of that guy for the team to win.”

Two of Cunningham’s high school teammates are also likely to go as top lottery picks, with Moses Moody (’20) and Scottie Barnes (’20) both projected to go in the top seven. Moody spent his last two high school years at the Academy, with Barnes joining for the 2019-20 school year.

“Moses is just a flat out sniper, a great shooter, and if you leave him open its going in,” said Boyle. “He’s a great one-on-one defender in that he’ll stick with you and won’t leave you all night. He’ll find you, stay home with you, and he can really change an offensive player’s shot with his length.”

“Scottie is Mr. Personality, a happy, energetic guy that motivates you, but can get under your skin if he wants to,” said Boyle. “He’s a master of getting in the opponent’s head. He gets the crowd involved, and you hate playing against him for that reason.”

Day’Ron Sharpe (’20), coming from the University of North Carolina at Chapel Hill, could make for an outstanding fourth member of the storied 2020 MVA team to go in this year’s draft.

“Day’Ron had a really good year at UNC,” said Boyle. “He’s capable of guarding ball screens, switching it up on a talented guard and moving his feet, and I think that’s something that people are going to be a little surprised at. He’s going to have a really great professional career.”

Also on the fringe of the first-round is Sandro Mamukelashvili (’17), who earned Big East Player of the Year honors this season at Seton Hall.

“I was doing basketball clinics in Italy when I met Sandro,” said Boyle. “We knew at that point that he had a chance to be an NBA player. He had a good feel for the game and good mechanics. The game in America was a bit fast for him at first, but he blossomed as a player at Seton Hall.”

Two more players, Filip Petrusev (’18) and Balsa Koprivica (’19), are in the running for spots in the 2021 NBA Draft, bringing the total to seven potential picks from MVA this year.

“The work Filip put in here helped him make the jump from Hartford to Gonzaga,” said Boyle. “He already had great versatility when he arrived, and was able to develop his confidence here that would help our team go 35-0 and go No. 1.”

Petrusev was named West Coast Conference Player of the Year in 2020, then signed a pro contract with Mega Soccerbet in Serbia to further develop.

Balsa Koprivica was a teammate to Petrusev on the team that won the 2018 National Championship at MVA.

“I think Balsa could be a second round pick, but if he doesn’t he’ll definitely have a great chance to make a team as a player that can develop over the next few years because of his size and ability,” said Boyle.

In addition to the storied varsity program at the Academy, Kevin Boyle and his staff lead the prestigious Center for Basketball Development (CBD), which trains players all the way from sixth grade through post grad. In the 2020-21 season, CBD sent three players to NCAA Division I schools, with two others earning time on the varsity squad. J’aVier Francis is going to the University of Houston, Jaylen Haynes will play at Virginia Tech, and Quentin Eboyo developed his fundamentals and skillwork enough to earn a spot at the University of Tennessee.

“We’re so grateful we could be a part of the development of these guys, to reach their goals to exceed their expectations. The culture that the school has developed both in our basketball program, but also in our school, and the maturity of the student body, and the direction that Dr. Kesselring has helped in leading the school in that way has all played a big part in helping these guys have great success,” said Boyle.