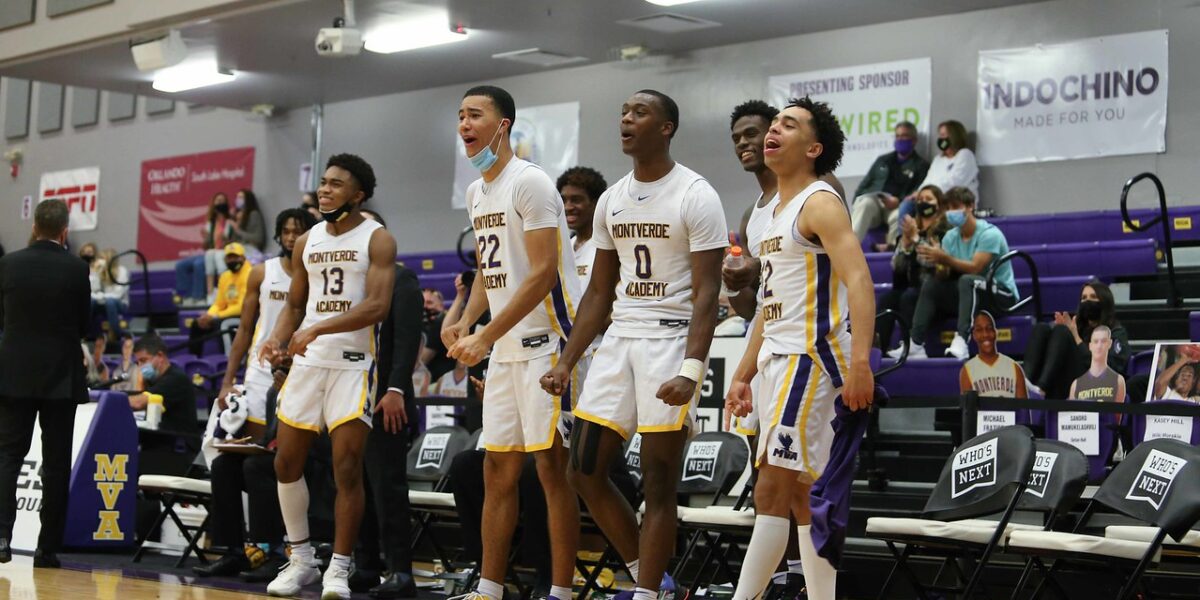 The Montverde Academy boys varsity basketball team kept their winning streak alive in the first round of intense MAIT competition from the National Interscholastic Basketball Conference teams. The MVA win streak now sits at 43 games, and the chance to extend that to 46 will come this weekend with three more matchups in the second weekend of MAIT. Check out highlights HERE.

The Academy hit the court on Thursday for a hard-fought overtime victory against an Arizona Compass Prep team that jumped from No. 10 to No. 2 in the country after this weekend’s games. The AZ Compass team took charge of the court for the first quarter, holding a lead going into the second. The Eagles sprang back with the lead bouncing back and forth throughout regulation while MVA fans held their collective breaths, to tie it up and be decided in overtime. The Eagles took a solid hold of the lead in overtime to outscore Compass 15 to four to end with a 76-65 win – an exciting way to start MAIT!

On Friday night, MVA separated themselves in the second half against a hungry La Lumiere team, ranked No. 27, that was eager to make their mark on the event. The Eagles led by only two points at the third quarter, but the game ended 64-48 in their favor.

The boys continued to prove their dominance in their third and final matchup of the weekend, handily beating Oak Hill for the win, 84-66. It was a total team effort for the Eagles in their final matchup, with five players scoring 10 or more points.

The lady Eagles took on Winter Haven in a ESPN3 televised game​. The ladies played a tense game, finally pulling away to secure a 76-66 win over previously unbeaten Blue Devils.

In other tournament news, there was great basketball action with a couple of upsets. AZ Compass Prep defeating Sunrise Christian, 50-47, to improve their No. 10 national ranking and oust Sunrise out of the No. 2 spot. La Lumiere scored a buzzer-beater to earn a win over nationally ranked Wasatch, 67-65.

The Eagles are back in action this Thursday at 7:00 p.m. against Calvary Christian, currently ranked No. 40, which will be streamed on BallerTV. Friday’s 5:00 p.m. game should be an intense match up against Sunrise Christian who are ranked No. 3 nationally, which will air on ESPNU. MAIT concludes Saturday against Wasatch at 6:00 p.m. on ESPN3.

While the audience is very limited, students can catch the action at watch parties hosted on campus. The games are projected on the Duncan Bell Tower for Upper School students to enjoy. “I was happy to see the engagement of students as they connected and supported our Girls and Boys Varsity Basketball teams,” said Mr. Weaver, Dean of Students. “One of my favorite moments was when Marianna Valenzuela Medina was being interview on ESPN and the students started clapping and cheering. With the portable bleachers, heaters, hot cocoa, and snacks, we created a meaningful and memorable event at the heart of campus.”

Be sure to catch the ongoing action on BallerTV, ESPN3 and ESPNU.