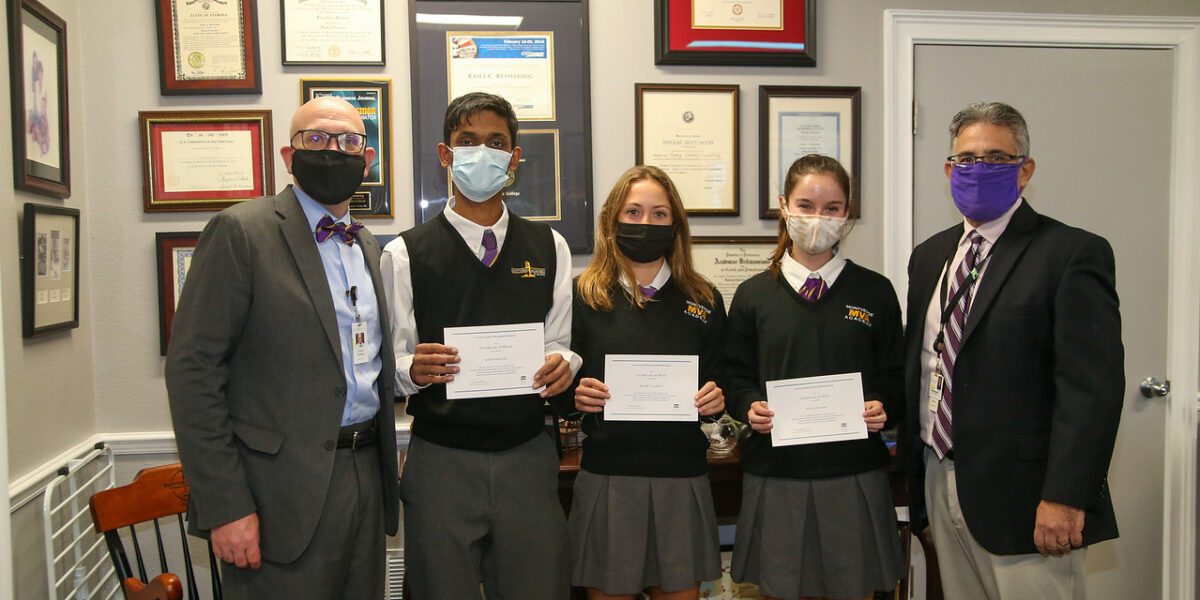 We are extremely proud to announce that three seniors, Kendyl Cardwell, Jathin Gadiparthi and Avery Morrison, have been selected as National Merit Scholar Finalists. They are among approximately 15,000 recipients recently announced nationwide. These academically talented high school seniors have an opportunity to continue in the competition for 7,600 National Merit Scholarships worth more than $30 million.

“It’s quite an achievement that is only attained through tremendous hard work,” said Dr. Kasey C. Kesselring, Head of School. “In addition to academics, these students also pursue interests in athletics and robotics, with Kendyl and Avery excelling in track and field as part of the MVA team that earned second place in the State of Florida meet, and Jathin as part of the MVA Robotics team that has secured an invitation to compete in the State competition. On behalf of Montverde Academy, Mr. Bernatavitz, the Administrative team, and the MVA Board of Directors, I congratulate these students on being named National Merit Scholar finalists. You are among an elite group of students nationwide and I commend each of you on your accomplishment.”

While students may not be singularly focused on earning a National Merit honors, it is recognition of the hard work, focus and dedication that students have invested throughout their high school years. Over 1.5 million juniors in about 21,000 high schools entered the 2021 National Merit Scholarship Program by taking the Preliminary SAT/National Merit Scholarship Qualifying Test (PSAT/NMSQT), which serves as an initial screen of program entrants. The nationwide pool of Semifinal and Finalists, representing less than one percent of U.S. high school seniors, includes the highest-scoring entrants in each state.

Kendyl Cardwell, Montverde Academy — is a member of Montverde Academy’s Distinguished Scholars program, the Head of School’s Leadership Institute (HLI) as a representative on the Arts and Athletics Leadership Committee and the Math Club; and runs on MVA’s state-ranked, nationally recognized varsity cross country team, who earned a second-place finish at the 2A State Championship. Kendyl also founded MVA’s Newspaper Club and has published articles in the South Lake Tablet, a Clermont based online news source. Kendyl will attend the University of Chicago, majoring in molecular engineering and running for them as well.

“This recognition means so much to me, it represents all of the hard work I’ve put in since middle school,” said Kendyl. “The National Merit award is something I had never really thought about far before the test, so I contribute this achievement to the great education I’ve received at Montverde Academy, and all of the extra work I’ve put in on my own. It is definitely a very special moment in my senior year.”

Jathin Gadiparthi, Montverde Academy – is a four-year member of MVA’s Robotics team who excels at the building portion of the competitions. Their team has secured a 2021 invitation to the State Competition and hopes to earn an invitation to the World Competition as well. Jathin is a member of the Math Club and pursuing a Study Area Concentration specialized diploma in Science, Technology, Engineering, and Math (STEM).

“My success has been realized through lots of work, dedication, and failure, but I couldn’t have done it without the aid of my parents and many teachers along the way,” said Jathin.

Avery Morrison, Montverde Academy — is a member of Montverde Academy’s Distinguished Scholars program and runs on MVA’s state-ranked, nationally recognized varsity cross country team, who earned a second-place finish at the 2A State Championship this year. Avery has committed to attend and run for the University of California, San Diego, an NCAA Division I cross country team.

“I think it’s pretty rad that Kendyl and I got the award since we’re on the same team,” said Avery. “Yes, I worked hard, but I’m glad I was still able to have fun in high school. My parents always taught me that if I’m not going try my best, then there’s no point in trying at all. So, I tried.”

Congratulations Kendyl, Jathin and Avery! We wish you continued success.