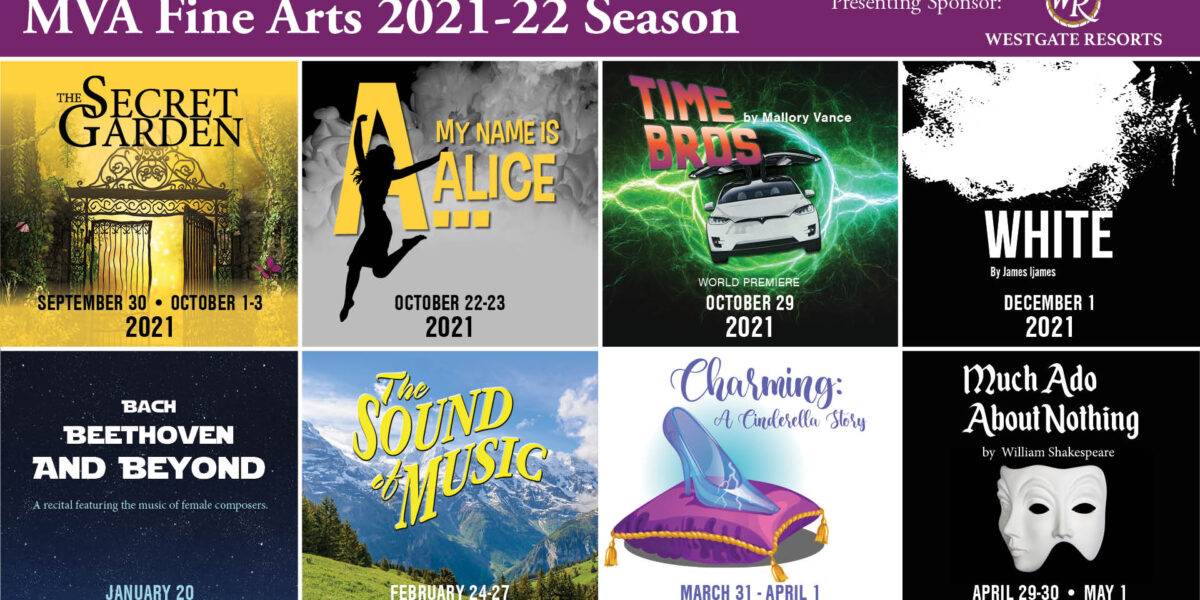 The Montverde Academy Fine Arts Department is excited to announce the lineup for the 2021-22 season, presented by Westgate Resorts. A combination of theatre and music performances will grace the stage at MVA as the Theatre Conservatory and Music Conservatory students look to sell-out performances.

“There are many factors that go into choosing a season and the shows/themes within it,” said Dean Bell, Montverde Academy Director of Arts. “Certainly, one of the primary considerations is assuring we are producing events that will attract a following. We are fortunate to have developed a very sophisticated audience here at MVA, and that allows us a lot of flexibility, but also means our discerning patrons have very high expectations about our productions and programming. It is important to be in equal measure, socially aware, nostalgic, pertinent, and entertaining; and provide audiences high-quality, thought-provoking shows worthy of their support. Beyond that, fulfilling our mission as one of the leading Arts preparation programs in the state, it is important our choices provide variety across genres and time periods, and require the rigor and complexities essential to our artists-in-training’s advancement of their skills and preparation for the next level. While certainly no easy feat, our Creative Team has assembled a diversity of offerings for the 2021-22 season which does exactly that. We look forward to sharing these moments with our MVA families and community and appreciate your continued support of our programs.”

Frances Hodgson Burnett’s beloved Victorian classic, The Secret Garden, blossoms anew in this enchanting musical by Pulitzer Prize-winner Marsha Norman and Lucy Simon. When young Mary Lennox loses her parents to a cholera outbreak in India, she is sent to live with her uncle, hermit Archibald Craven, who lives in an imposing, secluded manor on the British heath. Inside the haunting house upon the hill, Mary finds a reclusive, long-suffering collection of souls. Since her aunt Lily’s death, Mary’s uncle has pushed away his surviving loved ones, leaving his bedridden son, Colin, alone. Sickly Colin, hidden away in the depths of the manner, bears the guilt of his mother’s death on his crippled shoulders. When Mary discovers her Aunt Lily’s hidden garden, locked shut and overgrown with vines, stubborn Mary is determined to revive the beauty that once was. Surrounded by spirits from the past, who both warn and welcome her, determined Mary begins to peel away the layers of sadness that cover the house and the garden, showing us the power that “one small girl” can have when she “wants things to grow.”

A…My Name Is Alice is a Musical Revue with works from 28 different writers. The cast consists of five women, who all play several different characters throughout the revue. The opening number of this musical revue is called “All Girl Band.” This song sets up the through-line for the entire show. A…My Name Is Alice is about the different roles women in our society play. Everyone is represented, from a housewife to an executive, to a famous blues singer and her psychiatrist. “Alice” represents all women, and therefore the show features women of all different ages and walks of life. In the opening number, all five women play a game of jump rope that children play called “A…my name is Alice.” Each woman starts out with that line and continues to describe their very different lives, which is the theme for the revue. Although it is a Musical Revue, it is not made up of all songs, there are several monologues as well. Each new scene introduces a new character or set of characters. They are all very diverse in subject matter and mood. Some of the lighter scenes deal with a woman getting wrapped up in a romance novel, and several “for women only” poems that look at the more abstract side to being a woman. The more dramatic scenes deal with the trials and tribulations of growing older, how friendships change through the years, and how to deal with the loss of a mother.

Think “Back to the Future” meets “Bill & Ted.” In this comedic spoof, Montverde Academy makes its second foray into commissioning a new play to premiere. This time local playwright, and resident reviewer, Mallory Vance has worked with the Theatre Conservatory students on creating this lighthearted offering. Best friends Tad and Todd are heading out on a double-date with friends Katie and Helen. Looking to impress the girls, Tad has “found” a Tesla which he intends to use to impress the ladies. Unbeknownst to the boys, though, this Tesla is prone to intermittent time travel which turns the date into a whirlwind of misadventures and jaunts through history.

Gus is an artist. Vanessa is an actress. Gus wants to be presented in a major exhibition for artists of color, so he hires Vanessa to perform as Balkonaé Townsend, a brash and political artist that will fit the museum’s desire for “new voices.” Everything is great until Balkonaé takes over and Gus has to deal with the mess he’s made. This play spins out of control as it explores issues of race, gender, sexuality, and art.

Bach, Beethoven, and Beyond: January 20

This offering takes traditional preparations for the annual Solo & Ensemble competitions and provides a new twist. This concert will feature songs by female composers throughout the centuries, highlighting their careers and accomplishments.

The final collaboration between Richard Rodgers & Oscar Hammerstein II, The Sound of Music, has become a play beloved around the world. Based on the true story of the Von Trapp Family Singers, this play captures a personal tale of growth and hope amidst the horrors of World War II. The Sound of Music tells the tale of young postulant Maria Rainer, whose free spirit has trouble fitting into the rules and regulations of Nonnberg Abbey. Commissioned by the Mother Abbess to serve as the governess for seven motherless children, Maria transforms the Von Trapp family home from a place of dour rules and regulations to one filled with joy, laughter, and music. In the process, Maria wins the hearts of all seven children–and their widower father, Captain Von Trapp. With Mother Abbess’ blessing, and to the children’s delight, Maria follows her heart, and Maria and the Captain marry. Upon returning home from their honeymoon, Maria and the Captain learn that their beloved Austria has been taken over by the Nazis, and the retired Captain is asked to report for immediate service in the Nazi Navy. When the Nazis show up at their door to take Captain Von Trapp away, it is a family singing engagement (wily navigated by their friend Max) that buys the family time to make their narrow escape. Their Austrian convictions compel Maria, the Captain, and the children to flee over the mountains of Switzerland to safety, taking the words of the Mother Abbess to heart: “Climb Every Mountain… till you find your dream.”

Completing this year’s focus on female empowerment in our music offerings, the traditional Cabaret will be a reimagining of the Cinderella story. In this modern re-telling, created by our Music Conservatory students, Cinderella doesn’t need Prince Charming. A self-assured and very capable woman on her own, we explore the complexities of this modern-day Cinderella through word and song, including some original music created just for this show.

Much Ado About Nothing: April 29-May 1

Much Ado About Nothing is a comedic play by William Shakespeare about misunderstandings, love, and deception. Benedick, Claudio, and Don Pedro arrive at Leonato’s house in Messina. Beatrice and Benedick bicker with each other and Claudio, a soldier, falls in love with Leonato’s daughter, Hero. Don John, who is Don Pedro’s evil half-brother, tricks Claudio into believing that he has seen Hero being unfaithful. Meanwhile, Don Pedro and others plot to bring Benedick and Beatrice together. Claudio accuses Hero of infidelity and refuses to marry her. Leonato is persuaded to pretend that she is dead. Hero’s innocence is proven, and Claudio repents. He agrees to accept Antonio’s daughter in marriage, and she turns out to be a Hero after all! The trick to make Benedick and Beatrice fall in love succeeds and he proposes to her at the end of the play.

The Montverde Academy Fine Arts is supported by the Arts Alliance where funds are raised to ensure that students can pursue their passion wholeheartedly with access to necessary supplies, equipment, and facilities. Arts Alliance members are guaranteed tickets for all shows, securing seats for any theatre or music production.