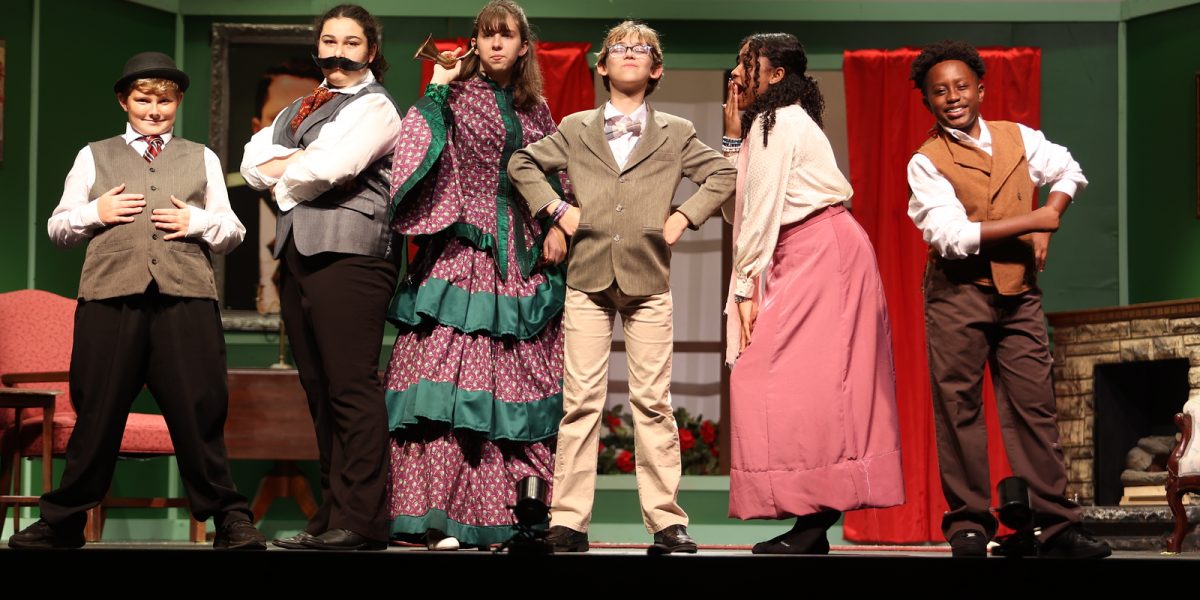 On the night of the Middle School theatre’s production of “The Nephew/Son’s Revenge,” audience members lined up for popcorn in the concession area. Some of them would be eating the popcorn during the show, but in the spirit of the melodrama, many were stockpiling multiple bags in order to throw their popcorn at the villain during the production, a perfect complement to their booing and hissing.

When deciding on a play for his students to perform this school year, the Middle School Theatre Arts Director, Mr. Adrian Wright-Ahern (pictured below), knew that he wanted to choose something that was not only fun for the middle schoolers to perform but also something that would educate them on theatre history.

With those criteria in mind, the choice was obvious. The students would perform a melodrama, a type of drama with sensational plotlines and exaggerated characters that would be easily accessible and fun at the same time.

When he began his quest to find the right play, he continually came up empty handed. Some of the plays he found were far too adult for middle school actors, so he started looking for plays written specifically for school-aged students. What he found, though, were plays that he felt talked down to the students and were too simplistic. He remembers thinking, “Come on, is there nothing for real students here?”

After having no luck, he knew his only choice was to write his own melodrama. And so “The Nephew/Son’s Revenge” was born. His play would need to appeal to a broad spectrum of ages as middle schoolers often have siblings in both the Upper School and the Lower School, who would most certainly be in the audience, along with their parents and other members of the community. It would need to incorporate witty puns to hold the attention of the older audience members but also contain enough physical humor for those too young to pick up on the puns. He thought back to Looney Tunes Cartoons he had watched as a child and how he would laugh at their physical humor. But when he was in college, he saw them again and picked up on things that he had missed before, such as political humor and pop culture references. He felt these cartoons were brilliant because they appealed to so many different age levels.

He didn’t want to put on a play simply for the purpose of putting on a play. “I wanted it to be a springboard for educational purposes,” he said. He wanted to teach students the historical and cultural context of the 19th century melodrama, basing some of his characters off of real-life historical figures such as Annie de Montfort and the Fox sisters.

To further serve his educational goal, his play would serve as an introduction and homage to “Hamlet,” but throughout the writing process, he took many liberties to twist and turn the plot into a standalone work of art.  His own play would be, as declared by one of its three titles, “a melodrama of words, words, words.” The play incorporates a plethora of puns and dad jokes, but it also layers in a great deal of humor that goes beyond the pun and explores physical humor unapologetically, with actors spitting in each other’s faces, dragging dead bodies across the stage, fighting with swords using exaggerated movements, and shattering bottles on people’s heads.

At Montverde Academy, young actors have had access to nuanced instruction and now an original stage play, which was customized specifically for the student actors and the projected audience. Mr. Wright-Ahern sets the bar high for his students. When some questioned whether middle school students would be able to handle the dense, witty material, his response was, “They can do it.” And do it they did.