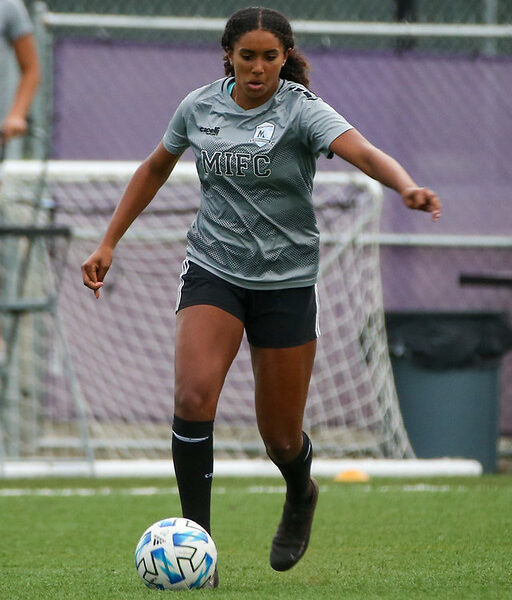 MVA is proud to announce that Mia Asenjo, a senior, and Carol Cazares, a junior and part of our Montverde International Futbol Club (MIFC), have been selected to represent the countries of the Dominican Republic and Mexico as part of the women’s National teams.

Mia has been invited to training camp to participate as part of the full team who will take on Puerto Rico (Huracan Azul Puerto Rico) in two preliminary matches. The best players in the country make up the national team to prepare for competition at the World Cup or Olympics level. Coming to MVA from Malverne, NY, Mia was named to the 2019 ECNL All-America team and led her Valley Stream South High School team to a NY State Class A Championship title. She was named the ECNL U15 Player of the Year in the Northeast Conference by Top Drawer Soccer. As part of the Dominican Republic team at the CONCACAF Women’s U20 Championship, her team advanced to the semi-final round and she scored four goals along the way. Mia has committed to play soccer at the University of Central Florida in Orlando, Florida.

Carol, a junior year from San Antonio, Texas, has been invited to participate in training camp with the Mexico National Team on the U20 team, which gives her the opportunity to show her abilities to continue being called back to represent Mexico in competitions. She has previously played on Mexico’s U15 and U17 National Teams. According to Coach Aristodemo, these training camps provide the country’s best players with the opportunity to develop and work together – providing the coaches with the ability to assess the team in preparation for competition on the World Cup or Olympic pitch. This opportunity is key to a player’s development as she’ll see how other players are developing and playing with other, older, more experienced players is invaluable experience.

Carol has been invited to participate in training camp with the Mexican U20 National Team, which gives her the opportunity to show her abilities and continue being called back to represent Mexico in competitions. She has previously played on Mexico’s U15 and U17 National Teams. According to Coach Aristodemo, these training camps provide the country’s best players with the chance to show the coaching staff their abilities and continued development. This opportunity is key to a player’s development as she’ll see how she is progressing vs the countries best. Carol is a junior from Monterrey, Mexico, who will return to MVA for her senior year to continue developing her skills on the field, in the weight room and in the classroom.

“For me, it’s important that when our players get called into their national teams, they are ready, fit, strong and are able to compete vs the top players in whatever competition they are playing in,” said Coach Aristodemo.

These types of opportunities are valuable for players as it provides opportunities to train with some of the best players in the world, builds experience at a highly competitive level, allows student-athletes to gain international exposure, and shows them what is developing in women’s soccer. MIFC has had more than 20 players earn the opportunity to represent their countries on the world stage – which is valuable in so many ways to these dedicated student-athletes.

“We are extremely proud of what Mia and Carol have been able to accomplish as part of the MVA team and as individual players,” said Robbie Aristodemo, Director of MIFC and Head Coach for girls soccer. “Having s student-athlete gain that exposure, compete with their countries best players is invaluable. Playing in international competitions, whether its exhibition games, camps or high-level events only provides our players with more experience and exposure at the top tier levels of women’s futbol.”

Congratulations to Mia and Carol!