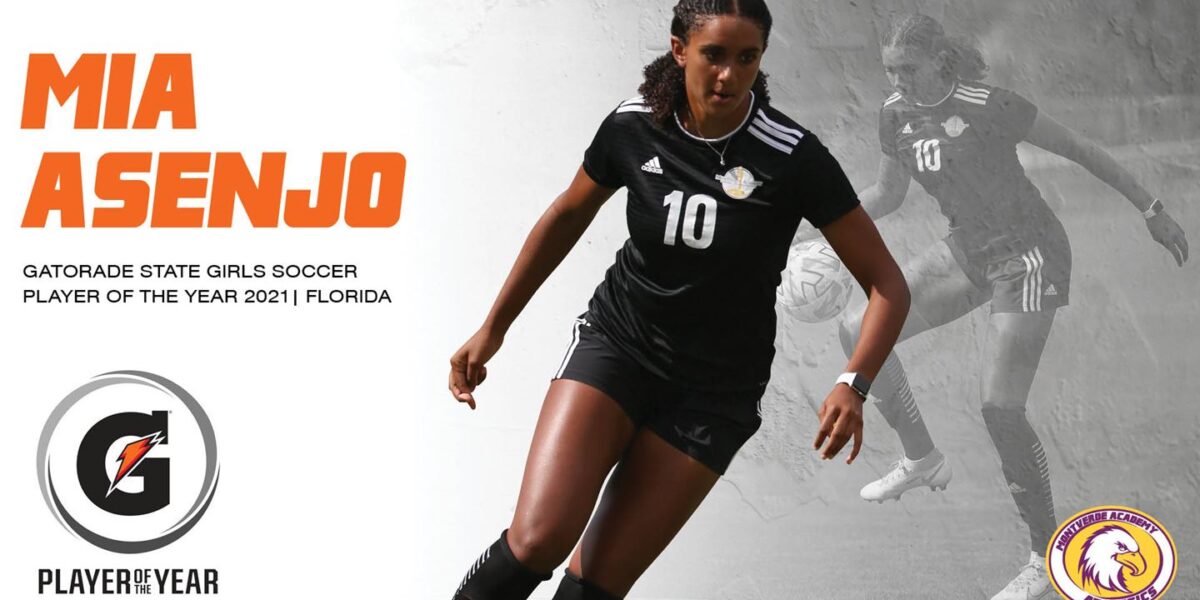 The award, which recognizes not only outstanding athletic excellence, but also high standards of academic achievement and exemplary character demonstrated on and off the field, distinguishes Asenjo as Florida’s best high school girls soccer player. Now a finalist for the prestigious Gatorade National Girls Soccer Player of the Year award to be announced in June, Asenjo joins an elite alumni association of state award-winners in 12 sports.

The 5-foot-8 senior forward led the Eagles to an 11-0 record this past season, including victories over the Class 7A and Class 3A state champions. Asenjo scored five goals and passed for four assists. A transfer from Valley Stream South High (N.Y.), she was a two-time All-State selection as an underclassman. A member of the Women’s National Team for the Dominican Republic, Asenjo is ranked as the nation’s No. 55 recruit in the Class of 2021 by TopDrawerSoccer.com. She concluded her prep soccer career with 47 goals and 27 assists.

Asenjo has volunteered with the Outreach 360 Foundation in the Dominican Republic, teaching entrepreneurship and English to children. She is also a Voice in Sport Foundation Ambassador, advocating equity for female athletes around the country, and she has donated her time as a youth soccer coach.

“Mia is a good attacking player—aggressive and direct,” said Robbie Aristodemo, Montverde Academy Head Soccer Coach. “She likes to take people on and score goals. She comes up with some big moments and plays when it matters.”

Asenjo has maintained a weighted 3.73 GPA in the classroom. She has signed a National Letter of Intent to play soccer on scholarship at the University of Central Florida this fall where she will join MVA teammates Maria Tregansin and Xashlie Negron.

Through Gatorade’s cause marketing platform “Play it Forward,” Asenjo has the opportunity to award a $1,000 grant to a local or national youth sports organization of their choosing. Asenjo is also eligible to submit a 30-second video explaining why the organization they chose is deserving of one of twelve $10,000 spotlight grants, which will be announced throughout the year. To date, Gatorade Player of the Year winners’ grants have totaled more than $2.7 million across 1,117 organizations.

Since the program’s inception in 1985, Gatorade Player of the Year award recipients have won hundreds of professional and college championships, and many have also turned into pillars in their communities, becoming coaches, business owners and educators.

To learn more about the Gatorade Player of the Year program, check out past winners or to nominate student-athletes, visit playeroftheyear.gatorade.com.