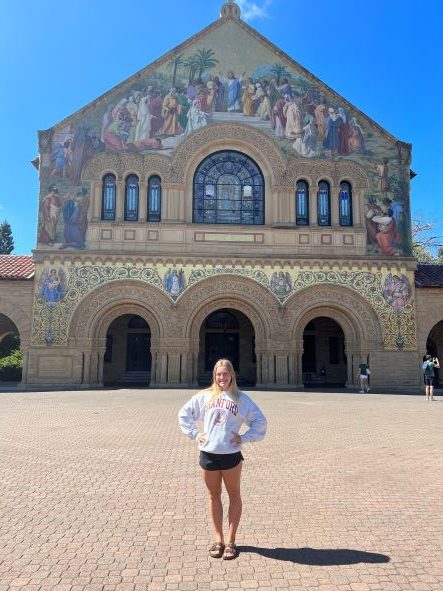 Kady Bills-McCoy has attended Montverde Academy for the past nine years. She is a senior this year and is a member of the National Honor Society and Spanish Honors Society. This summer, she attended the Stanford Summer Session where she was able to live on campus and take classes for college credit. “I chose this program because Stanford has been my dream school since elementary school,” Kady said, “and even if Stanford isn’t the college I attend, this program was able to prepare me for college courses with high rigor all over the country.”

In the Economics 1 class that she took during the summer session, she learned about growth formulas, graphs, rules, laws, supply and demand, inflation, accounting, expanding markets, trade, governmental economics, and macro and microeconomics. She also took a physiology class. Kady said, “This was a favorite class of mine because it correlated to what I hope to major in,” which is sports medicine. Students learned about the functions of various bodily organs and were given clinical examples of patients and had to give treatment options. She also took a statistics class where she learned various statistical methods, some coding in RStudio, and how to organize and calculate information from data.

All of her professors had a Ph.D. in their field. One of her professors, Dr. John B. Taylor, even has his own economic contribution named after him, The Taylor rule, which is about how nominal interest rates should be determined. He also served as an economic adviser for President George W. Bush under the Secretary of Treasury.

Kady is a level 10 USGAA gymnast. Before going to the summer session at Stanford, she broke her ankle, so her recovery period was during her stay at Stanford where she had to maintain her strength and build confidence. “Both the Stanford coach and the gym coaches were amazing and very helpful,” Kady said.

Being about 3,000 miles away from home in California was very emotionally challenging for Kady. “It was challenging to navigate through these classes without direct instruction,” Kady said. “I learned that whatever I put into the class is how much I would get out of it.” She found it difficult to juggle all of the lectures, office hours, and TA sections between all three classes, but overall, these challenges motivated her to put in more effort so she could get as much as possible out of the program and ultimately her dream school.