Imen Nasser Lights Up the Fashion Runway with Electric Violin 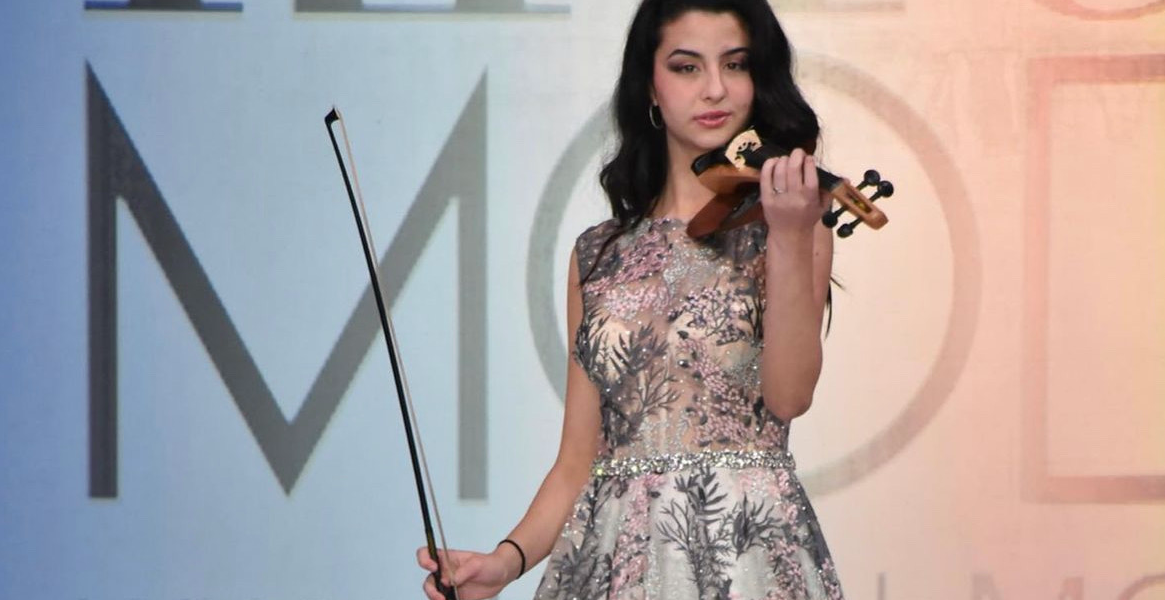 Imen Nasser, a principal violinist in MVA’s Music Conservatory, has been playing the violin since she was three years old. She played for the National Youth Orchestra in Venezuela from age 7 to age 12 and has even had the opportunity to play with Emmy-winning composer Mark Wood. Playing violin is second nature to her, but what makes her incredibly unique on the stage is that not only does she play the violin, but she has also recently begun incorporating the violin into her emerging modeling career, having recently walked the runway and played the violin at New York Fashion Week.

Music has always been a part of her life, and she knows that a career in music awaits her. Before she started taking violin lessons, her mother enrolled her in ballet classes, swim classes, sports leagues, etc.; but they all made her cry. Violin lessons were the only thing that didn’t make her cry, so her mother had her continue with the violin. Her lessons consisted of learning pages and pages of concertos for the National Youth Orchestra. “There was a time when I was eight that I wanted to quit because I would see all my friends through the window playing, and I would be practicing. I hated it. It was a tough time.” Imen says that her mother didn’t exactly force her to take the lessons, but she would say, “You’re going to thank me later.” Later in Imen’s life, that would indeed become true.

She moved with her family to the U.S. at the age of 12 and started performing in violin gigs to make money and was no longer able to take violin lessons. During that time, she developed quite an ear for music since much of what she played was by audience request. Imen was the only Hispanic/Arabic student at her school in Memphis, Tennessee, and she faced much discrimination. When she and her family first moved there, no one in her family spoke a word of English, but within six months, she was speaking English fluently.

Her parents’ work, along with her desire to find a school where should would be happy, would bring the family to Texas during her freshman year. She loved so many things about her new high school in Texas, including its nationally-recognized orchestra comprised of more than 600 students. “The violin in that orchestra program kind of adopted me, and that was my safe space,” says Imen. The school was much more diverse than her previous school in Tennessee, and it was there that she met Mark Wood. “He’s an amazing violinist,” she says. Wood traveled to various high schools teaching students to play the electric violin, and he chose Imen to play a solo part in the school’s concert.

She was thriving in Texas. But then her parents’ work would require the family to move once again when she was a junior in high school, this time to the Orlando, Florida, area. She enrolled in a nearby school, but that particular school did not have a music conservatory, and she knew pretty quickly that she would not be able to grow in her music as a result. She recalls googling “best conservatories in Florida,” and Montverde Academy appeared first in the search. She was thrilled to learn that it was only 15 minutes away. “This is perfect,” she said to herself, and she drove to the school for an audition.

Not only would she thrive at Montverde Academy as a Music Conservatory student, but she would also find a place that would welcome her with open arms, a place that celebrated diversity. She quickly formed deep friendships. “Most of my friends are not from where I’m from,” she says, “and that just makes the group so much better.” She has some friends from South Africa, some from Mexico, and some from Dubai. She recalls one time having dinner with her friends and each person bringing a different dish from their respective cultures, and they listened to all different types of music that night.

This past spring, MVA’s strings students had the opportunity to play with Mark Wood. Imen was thoroughly excited to be able to play with him again. “It was really great to see him again. He invented the electric violins, and it’s so cool that he did so much for the business of classical music. I really look up to him.”

Ever since she was little, Imen has wanted to be a model. And when she told her mother, her mother said, “You’re not ready to become a model.” Having been in pageants in Venezuela, her mother wanted her to enter a pageant first before embarking on a modeling career. Imen then entered an international pageant in Orlando, and she won! She didn’t like being in the pageant, claiming she didn’t know how to walk properly, but she felt that the talent portion, where she was able to play the violin, was what carried her in that pageant.

The pageant would go on to open up many doors for Imen. The previous pageant winner, who had given her the crown, invited her to participate in Miami Swim Week and then to New York Fashion Week, making Imen’s dreams of becoming a model a reality. She remembers the week being a lot of fun but also very stressful. “I went to what seemed like 10,000 castings,” she recalls. “I had to run around the subway in heels with my mom. I had a show to go to, and the venue for the show was on one side of Times Square. I walked to the show, and I had 10 minutes to get from one side of Times Square to the other because there was another show on the other side. I had to sprint in heels through Times Square with my mom holding a dress that I was wearing.”

One of the designers saw her practicing the violin and said, “I want you to open for me.” So she opened New York Fashion Week with the electric violin. “I played a couple of songs for her on the runway on the electric violin with everybody watching, and then I ran back, changed, and then I came out and modeled.”

She wants to continue incorporating modeling into playing the violin. “Not a lot of people do it,” she says. “Incorporating the two gives the violin more of a modernized look.” Plus, combining the two helps to set her apart. Imen is 5’10”. When she sees other girls in the modeling industry who are 6 feet tall and she feels insecure, her mom says, “But does she play the violin? She has something that you don’t have, and you have something that someone else doesn’t have.”

She has learned that she’s stronger than she thought she was. “In the modeling industry,” she says, “everybody tells you to get ready for rejections, and they’re not kidding.” She has learned over the years, especially with the violin, that discipline will take her anywhere and that practice does make perfect. “The only person that can work for what you want is yourself. My mom can’t go to the gym for me. She can’t practice the violin for college auditions for me. That has to be a me thing that I have to do.” Imen feels that in showbusiness, you have to have a strong work ethic, perseverance, and luck.

Imen is scheduled to go to Fashion Week in Paris, Milan, London, and New York next year! She is grateful for Montverde Academy giving her a place to work on music for five hours a day and for all the doors it has opened for her.