Hats Off to MVA’s Graduating Class of 2021 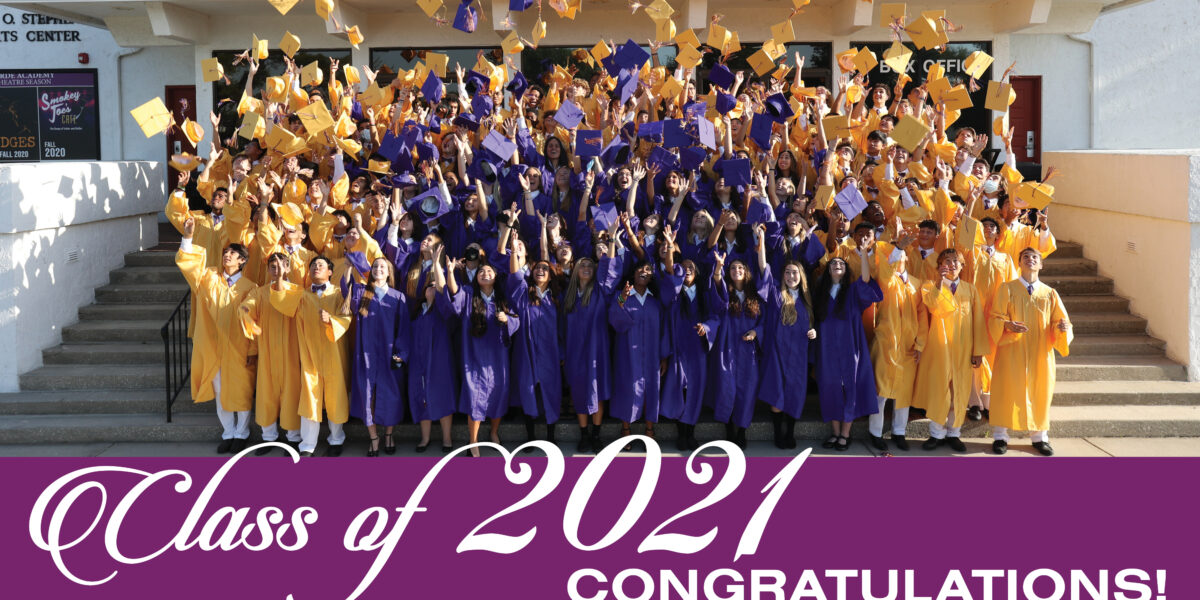 Hats Off to MVA's Graduating Class of 2021

Montverde Academy is proud to have graduated 214 seniors during our 108th Commencement Ceremony on Saturday, May 15, 2021. These senior Eagles represented over 35 countries and were accepted into top-ranked schools including Boston College, Davidson College, Emory University, the University of California at Los Angeles, Georgia Institute of Technology, University of Chicago, University of Florida, University of Miami, University of Michigan, the University of North Carolina at Chapel Hill, University of Pennsylvania, University of Southern California, and Vanderbilt University. This class was offered over 13.2 million dollars in collegiate scholarships both for their work academically, athletically, and artistically. The Class of 2021 includes two National Merit Scholarship Award winners in Jathin Gadiparthi and Kendyl Cardwell, 30 Distinguished Scholars, and 41 Cum Laude Society inductees.

Valedictorian Kendyl Cardwell and Salutatorian Lillian Anderson both gave addresses at Commencement, recognizing their fellow graduates for their incredible accomplishments.

“This graduating class has faced many challenges throughout their latter years in the Upper School,” said Dr. Kasey C. Kesselring, Montverde Academy’s Head of School. “While many students around the country could not participate in in-classroom learning, our senior class had the opportunity to learn in-person, virtually, or hybrid, allowing for academic study at the highest level. They balanced athletic events with fine arts productions, college applications, and advanced placement classes, all to find themselves accepted into over 200 colleges and universities. I can proudly say that Montverde Academy is extremely proud of this graduating class, and we can’t wait to watch them flourish at the next level.”

Several awards were presented to deserving seniors as their impact on the MVA community throughout their time at the Academy resembled those same characteristics of those who the awards were named after. Alia Rodriguez was presented with The H.P. Carpenter Award in honor of Mr. H.P Carpenter who, alongside his wife, founded Montverde Academy in 1912. This award is given to a senior who, by their performance, has had a significant impact on the life of the school.

Lauren Kiernan earned the Dalton P. Monroe Award, which is given in honor of Dalton Monroe, who proved to his students by example that his adversity would not conquer his spirit. This award is given to a senior who was always able to see the positive side and keep their humor despite significant adversity. The Dalton P. Monroe Scholarship provides a $1,000 academic scholarship to the college of the recipient’s choice.

The Roger R. Ross Head of School Award was presented to Kendyl Cardwell which was named in honor of the nine Headmasters who served the Academy since its founding. This award is given to a student who, in all their academic and extracurricular endeavors, has achieved a level of excellence that exceeds all others while maintaining the highest standards of character.

Finally, Bradly Peterson and Sofia Bilski were presented with the Trustee’s Leadership Award, which goes to students who have exhibited the qualities of a leader and have served the community with distinction in one or more leadership positions.

“These award recipients exemplify all that is Montverde Academy, and we are thrilled to be able to call them alumni as they head into their next phase of life, prepared with knowledge and experiences that they gained at the Academy,” said Dr. Kesselring.

Performers Voctave and Mr. Ben Gulley provided musical renditions of classic pieces, while Oscar-winning actress, author, and activist Mrs. Marlee Matlin gave an inspirational speech as the Commencement Speaker. These honored guests helped all that were in attendance celebrate our graduating class.

Congratulations to our recent graduates and newly appointed MVA alumni!