Finding Peace in Happy Accidents at the Jingle Playhouse Build 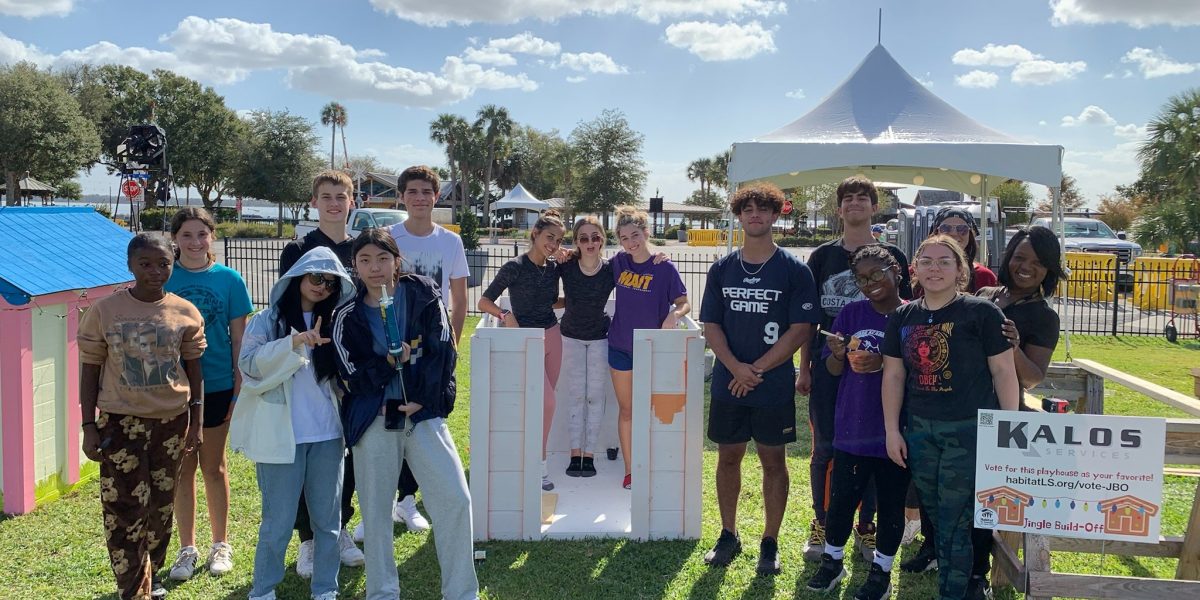 On Saturday, December 3, students in the Upper School volunteered to participate in the Jingle Playhouse Build with Habitat for Humanity. Different teams competed to build the best playhouse for children in need. The team from Montverde Academy, sponsored by Kalos Services Inc. in Clermont, was assigned to build a playhouse for a child named Jordan and ultimately won fourth place. Jordan is five years old and really loves Legos and playing in the outdoors. The team wanted to create a space for him that was calming and relaxing that incorporated his love of Legos and the outdoors.

The team members did not have much experience with building projects. On top of that, they didn’t know exactly what they would be doing until they arrived at the building site where they would be greeted by someone from Habitat for Humanity who would give them instructions, and then the team would use their own creativity to create the structure.

They went to their station where various slabs of wood were laid out, and they split into two groups, one to build the base of the structure and the other to build the roof. The outside of the house was where the team decided to go with the Lego theme. They bought wooden dowel rods from Home Depot, cut them into small pieces, and glued the small circles onto the outside of the house to make it look like Lego blocks.

Once the construction was complete, the team planned the design. Keeping Jordan in mind, they decided to paint the inside and outside of the house in calming, inviting colors—green, gray, and various shades of blue, along with extra splashes of orange on the outside. Mieke Palmer, a twelfth-grade AP art student, was commissioned to paint a mural of a mountainous nature scene on the inside of the house. “This was a new experience for me,” said Mieke. “I usually paint portraits, so the mural of the mountains was something new for me.” She channeled the famous Bob Ross’s philosophy of “happy accidents” to help her face this challenge. “But paint is still paint, so I tried to mix some colors and use depth so the mountains in the background were darker, and then as the mountains got closer, they got lighter, and I added some little Bob Ross trees. I felt happy to be there because I knew that I was helping a little child in need during Christmastime and was helping to make his Christmas a little happier.”

On the outside of the house, Alaska Dorvil, an eleventh grader at MVA, freehanded the boy’s name above the door to customize the playhouse just for him. “When I put his name on there, it hit me that this was his playhouse that he would be able to enjoy,” said Alaska. “I didn’t do any of the painting of the scenery on the inside of the house, but when I looked inside and saw what everyone had put together, I was like, ‘Wow.’ I knew the little boy was going to be encouraged.”

Many of the students found the project to be somewhat stressful because not only were they competing against other teams, but they were also racing against the clock and had to finish by 3 p.m. Justin Orridge, a twelfth grader at MVA, said, “It was a very long, hot day outside. We were provided with food and water, but the sun was beaming down on us. For a moment, I wanted to give half effort. I didn’t want to keep going. But then I realized why I was doing it. I was making an impact on a young child’s life, and that kept me motivated to keep working, to keep painting. Teamwork was an essential skill. The project required all of us to work together and to bond. Some of the people I had never met before, and I spent an entire day with them working toward a common goal.”

Alaska Dorvil agreed that there was a great deal of pressure. “I was on edge. Not only were we racing against the clock, but we also had to come together with these ideas on the spot and play it by ear for the most part.” She was very surprised by her team’s efficiency, and she even surprised herself. “I usually have the trait of trying to take things into my own hands, or I fear that my work will disappoint others or that my efficiency isn’t good enough,” she said. That day, she learned to practice patience and trust others. “Other people’s ideas matter—it’s not just me here. I was really encouraged by how stepping back and humbling myself allowed me to create something. I was like, ‘You go, Alaska, for allowing yourself that peace. I’m very grateful for everyone that was there. And hearing Mrs. Price acknowledge me as an artist was encouraging, and seeing my work being recognized by others and by other artists alongside me was also encouraging.”

Before the playhouse was delivered to the boy’s house for Christmas, he was able to see the house on the site where it was built. When he saw the house, he didn’t even want to stop for pictures—he ran straight inside to play.

The project was a great learning experience for the team. They impacted the life of a child, and they each walked away surprised by what they were able to accomplish. Justin Orridge said, “I was surprised that I was able to build something like that because I had never done it before, and I was surprised by how simple the project became because of the group’s teamwork and the assistance of Habitat for Humanity.”