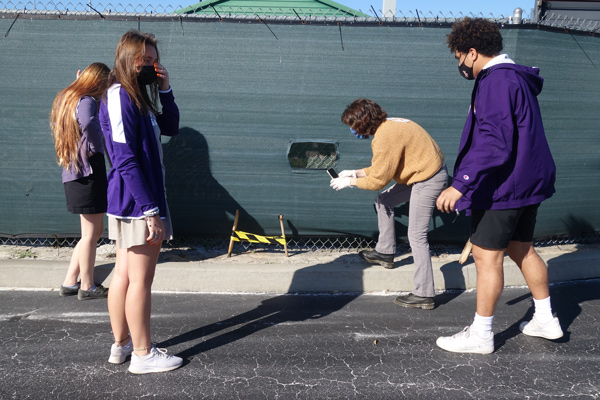 “I wanted to find an easy way to study the decomposition process and soil health,” said Mrs. Napoles, environmental science teacher. “Most commonly found soil microbes have enzymes to help them break down natural fibers, like 100 percent cotton briefs, so they can readily consume a cotton sock, t-shirt, or underwear. They have a harder time decomposing any sort of synthetic material, which is found in the waistband and reinforced stitching of the briefs. So, bury a sock, when it’s time to excavate you might not find anything at all, but bury a pair of underwear, and the elastic waistband is usually easy to find, making for more accurate data collection.”

The new, cotton briefs were buried in five different locations around campus in shallow holes with markers so the class could relocate the briefs after time had passed to see how the various soils would affect the material after being buried since October.

Students used the physical and chemical properties of the soil to make predictions as to which would be the “healthiest” soil for plants. This required them to learn about how pH, nutrients and the composition of soil itself can affect soil health and soil fertility. The added layer of decomposition rate provides further evidence to support their analysis. Students were able to see the rate of decomposition determined by percent change in mass of underwear as well as qualitative and quantitative comparisons between the samples. Soil bacteria are pretty hardy critters, but they do have a range of tolerance when it comes to pH, moisture, soil texture and nutrient availability. This multi-faceted study of soil is meant to give students a deeper look at soil health, and how a range of variables can affect its quality. Plus, you get to play with dirt; who doesn’t love that?

The locations by the Kreke Building, Lake Florence and the equestrian pasture had briefs that were almost completely gone, leaving only the waistband and reinforced stitching, which signified healthy soil. The location behind the beach volleyball courts was a sandier soil that proved to be less healthy as revealed by briefs that were dirty, but much less decomposed with much of the fabric remaining intact. The final location by the sports complex and baseball fields was also tattered and nearly gone.

“The ‘soil your undies’ experiment showed me shocking results,” said Indaya (Daya) Byer, a senior. “I didn’t expect the sample by the Kreke Building to be so deteriorated because of the ground being mulch and the construction going on. But the Sports Complex, Equestrian Center and Lake Florence samples were as I suspected them to be, especially by the Equestrian Center, where the soil looked the healthiest when we first buried the clothing. The pair by the beach volleyball courts was a big surprise after digging up the other samples. The soil is very sandy there, and I didn’t expect there to be as much fabric left as there was.”

“Environmental science, in my opinion, is such an important subject,” said Mrs. Napoles. “We all live here on Earth, and the better we understand the complex interrelatedness that governs every natural system, the easier it becomes to make decisions about our lifestyles and behaviors. In short, to sustain our resources and the forces that generate them, we have to learn about our environment. In my classes, any opportunity that allows students to peel back a bit of nature to try to figure out how it works and how it relates to us, is a lesson worth getting your hands a little dirty for.”