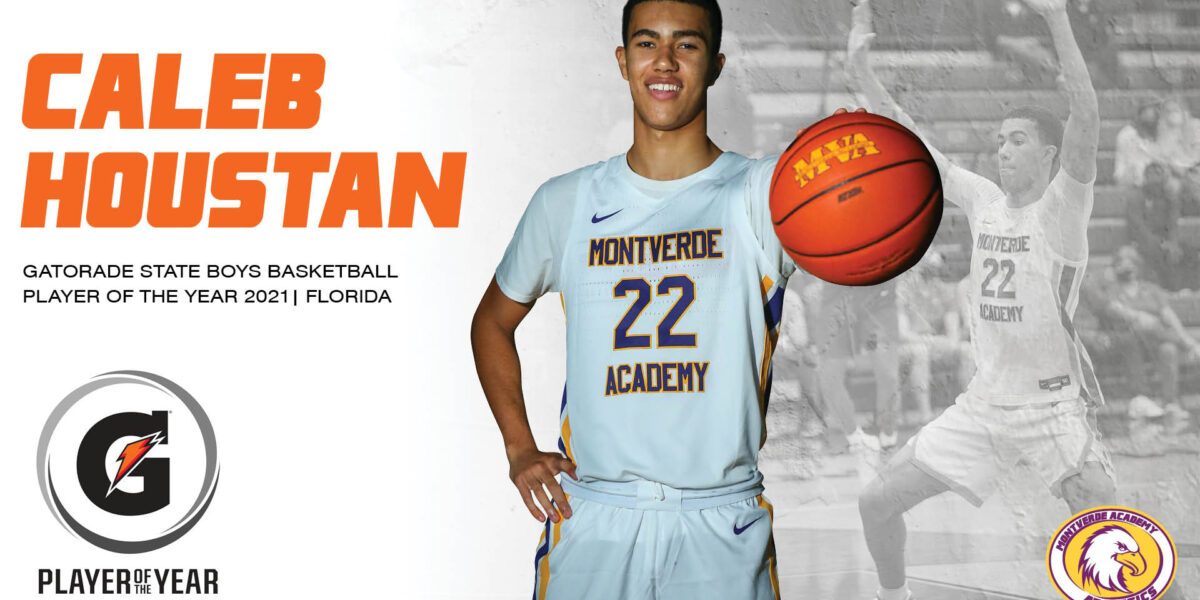 The award, which recognizes not only outstanding athletic excellence, but also high standards of academic achievement and exemplary character demonstrated on and off the field, distinguishes Houstan as Florida’s best high school boys basketball player. Now a finalist for the prestigious Gatorade National Boys Basketball Player of the Year award to be announced in June, Houstan joins an elite alumni association of state award-winners in 12 sports.

The 6-foot-8, 210-pound senior forward led the Eagles to a 26-1 record, a No. 1 national ranking, and the Geico High School Nationals championship this past season. Houstan averaged 13.2 points, 4.6 rebounds, 1.7 assists, and 1.2 steals per game. A McDonald’s All-American Game selection, Houstan was one of 10 semifinalists for the Naismith High School Trophy. He also won a silver medal at the 2019 FIBA U16 Americas Championship as a member of Team Canada and is ranked as the nation’s No. 7 recruit in the Class of 2021 by ESPN.com.

A Toronto native, Houstan has volunteered locally as a youth basketball coach. “One of the top shooters in the high school game, Houstan brings a shot-making prowess to the game as well as a stoic expression,” said Paul Biancardi, ESPN National Recruiting Director. “His positional size and movement with the ball along with shooting the ball from the same lift pocket makes him an accurate marksman and hard to defend.”

Through Gatorade’s cause marketing platform “Play it Forward,” Houstan has the opportunity to award a $1,000 grant to a local or national youth sports organization of their choosing. Houstan is also eligible to submit a 30-second video explaining why the organization they chose is deserving of one of twelve $10,000 spotlight grants, which will be announced throughout the year. To date, Gatorade Player of the Year winners’ grants have totaled more than $2.7 million across 1,117 organizations.

Since the program’s inception in 1985, Gatorade Player of the Year award recipients have won hundreds of professional and college championships, and many have also turned into pillars in their communities, becoming coaches, business owners, and educators.