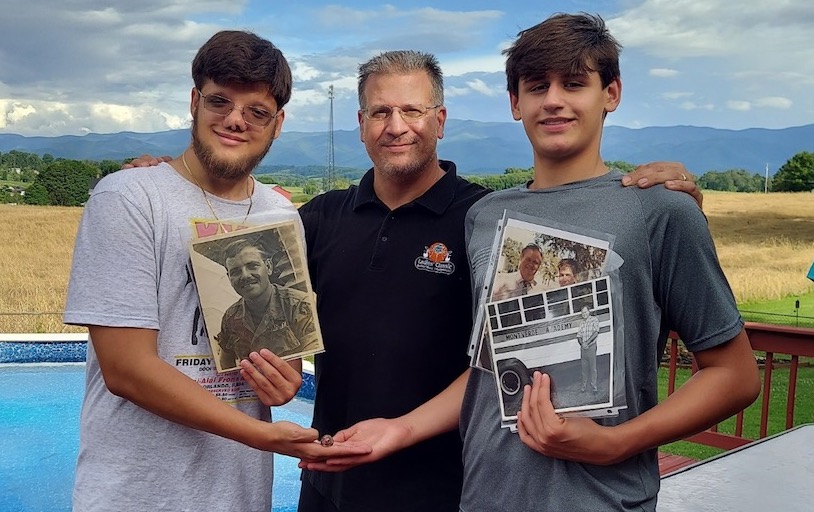 During the re-landscaping of the Dining Hall on the Montverde Academy campus, maintenance worker Mick Snider discovered a ring buried over a foot underground. The ring found its home shortly after that and belonged to none other than MVA alumnus William Daniel ‘Danny’ Thompson ’66 whose son, Daniel Thompson ’90, is also an alumnus of the Academy and elated to honor his father’s memory. Daniel’s sister Michelle (Thompson) Gibson also attended the Academy for several years during their father’s tenure.

Danny Thompson served in the US Army (E5) in Vietnam with the 554th Engineering Brigade stationed at Cu Chi, Vietnam along with special assignment in the 25th Infantry Division from April 1968 to April 1969. Danny Thompson was also a member of the Tropic Thunder Division based in Hawaii. After earning a Purple Heart during his time in the service, he returned to Florida and started work at his Alma Mater as a member of the MVA staff from 1978 to 2004.

“Danny never ordered/received a Montverde Academy senior ring and had inquired about getting one while in Nam,” said Daniel Thompson. “I have a letter from my grandfather that was sent to Herff Jones inquiring about purchasing one in 1968 where he specifically stated that dad wanted a ruby stone. During my father’s employment at Montverde Academy, he would dive right in and wear the dirt and grease as a badge so to speak. He was heavily involved in the new Dining Hall construction in the mid-80s and I am sure dealt first-hand with plumbing, landscaping, and irrigation throughout the ’90s and early 2000s. I took him to the Vietnam War Memorial Wall on an Academy field trip with students in 2003. He was a very proud and patriotic man.”

“The discovery of this ring on our grounds created such a buzz in the alumni office,” said Nyoshie Higgins, Alumni Relations Coordinator. “When we realized it was the ring of a Vietnam Vet it held even greater urgency and duty for us to find the owner. When the son of William ‘Danny’ Thomas ‘66 reached out and told us he believed it was his dad’s ring we could not be happier. The story behind the ring and the legacy it held regarding his service made this a particularly heartfelt reunion. We are so happy that the ring found its way back to this true MVA family whose members are not only alumni, but also former employees at MVA. This is the happy ending we were hoping for.”

Danny Thompson passed away in Montverde, Fla. Thursday, Jan. 22, 2004, at his residence following a brief illness.

“I believe that without memories there is no life, Danny brought such life to campus and he loved being here at MVA,” said Mrs. Lynne Moore, MVA Student Center Manager. I have countless fond memories of Danny. He was stern with his words and demeanor at times but had the biggest heart, truly a dear soul. It’s hard to forget such strong memories with the best people, the entire Thompson family will always have a piece of my heart!”

“As for Danny, he dove in with both feet first when it came getting things done for MVA,” said Mrs. Toni Specht, former Assistant to the Head of School. “He could come across as rough and gruff but the truth of the matter was that he had a heart of gold and would give you his shirt off his back if you needed it at any time of the day or night.”

It is not every day that special mementos are discovered and returned to their rightful owners. Thanks to the Montverde community for their help in locating Daniel and his family, this wouldn’t be possible without everyone that shared memories.